Evolution of the Fecken-Kirfel Machines: The V Series

Today, more than 320 Fecken-Kirfel Vertical CNC Contour Cutting Centres are in operation worldwide. A success story that was only possible as the company dared to look beyond its own horizon. In this fourth article on the history of the Fecken-Kirfel machines, we focus on the evolution of the V Series from the first manual vertical cutting machine designed in 1956 to the current solutions for the flexible and efficient production of small and larger contour parts. At present, fully automatic cutting lines that combine a horizontal splitting machine and a vertical contour cutting centre, as well as a wide range of software solutions, constitute the current state-of-the-art offered by Fecken-Kirfel.

When Horizontal Cutting Machines had already established themselves as state-of-the-art, Fecken-Kirfel recognized how much additional potential it would open up for the customers to find a way to also economically produce smaller parts. The courage to think outside the box provided a significant impetus at the right moment: The development of a new machine type for vertical cutting was majorly inspired by bandsaws designed for the use in steel- and wood-processing industries.

The first Vertical Cutting Machine 70 V went into operation in November 1956. This machine consisted of a stationary cast-iron frame with an endless bandknife running over four knife pulleys as well as a manually movable (rolling) material supporting table with manually adjustable side fence. The maximum cutting height was 500 mm.

Soon thereafter, Fecken-Kirfel developed the Vertical Cutting Machine V 1 based on the 70 V. This machine type was equipped with a stationary frame in a welded design with a double bevel endless bandknife as well as a manually movable (rolling) material supporting table. This table also had a manually adjustable side fence and thus allowed for easily moving the material. The added value was that the desired layer thickness could easily be adjusted by means of a mechanical repeating device (ratchet). The maximum cutting height was increased to 1.000 mm. The double bevel bandknife allowed for the cutting of materials during the forward and backward motions of the table. The idea behind was nothing short of “brilliant”: The apparently two cutting edges of the bandknife were actually only one, as the bandknife was slopingly welded, respectively had the form of a Mobius loop. To the present day, Fecken-Kirfel has remained true to this principle. This applies for the development of the V 11 - the successor model with modified cutting unit - in the year 1967 as well as for the development of the V 111 in the year 1985 – a model with a reinforced cutting unit that is still part of the Fecken-Kirfel portfolio. For a better accessibility, the bandknife grinding device of the V 111 is laterally positioned. Since the development of the V 11, special machine designs (V 11/5, V 111/5 that are equipped with bandknifes with single bevel, smooth or toothed blades) are available for technical applications, low cutting heights or with additional devices such as circular or angle cutting devices. The Fecken-Kirfel portfolio also comprises vertical bandknife sawing machine designs (V 13, V 113) for one-side sawing applications.

Specifically for precise lateral trimmings of long blocks, we developed the trimming units V 6 (design with endless bandknife) as well as the V 7 (design with endless bandsaw) at the beginning of the 1960s. For this purpose, we combined two vertical cutting machines that were individually adjustable. The rough adjustment took place manually according to scale or by means of a gear motor, whereas the fine adjustment took place according to scale via a handwheel that was attached to the second shaft end of the motor. An additional cutting unit served to divide the blocks. The subsequent models, the cutting units of which corresponded to the design of the V 11, had the designations V 16 and V 17. Today, with the models V 116 and V 117, Fecken-Kirfel offers its clients two trimming units equipped with a preselection device as well as motorized positioning. In their design, the cutting units correspond to the machine type V 111.

With the Vertical and Angular Cutting Machine V 4 that we introduced in 1962, Fecken-Kirfel added a machine type to its portfolio that could not only perform vertical but also angular cuts. Also this machine type consisted of a stationary swivelling cutting unit and a manually movable (rolling) sliding table. For this machine, the swivelling cutting unit was designed as a movable “parallelogram”. This way, it was possible to achieve cutting angles of up to 45° on the right and left side through a manual swivelling of the cutting unit.

The successor model, the V 14 that was launched on the market in 1967, was replaced again by the V 24 in 1970. This new machine had an increased swivelling range (60° to the left and 70° to the right), and it offered a motorized angle adjustment. The machine could be adjusted to an inclined position either by pressing a push button or respectively via the display or a preselection with follow-up/positioning control. For the processing of technical foams, PU rigid foam, Styrofoam and similar rigid foams, the V 24 – in the version V 24 S – is available either with a smooth or toothed bandknife with a unilaterally sharpened blade or with a bandsaw. However, the V 24 S only allows for cutting or sawing in one direction.

The first machine that Fecken-Kirfel developed for manual contour cutting, was the model V 5 consisting of a stationary cutting unit as well as a stationary table. With the help of templates, the material that was to be cut was guided along the bandknife by the machine operator. The successor model of this machine, the V 15, was in turn replaced by the V 115 model later on. Today, the freehand cutting mode has become an integral part of the manual and automatic vertical cutting machines (V 111 and V 51).

1971: Evolution of the V 11 into the Automatic Vertical Cutting Machine V 21

Further development steps were to follow: In the year 1982, the V 21 was equipped with a PLC developed by Fecken-Kirfel as well as a metering device (FKZ-4D/1) and was thereby evolved into the V 31. Just four years later, Fecken-Kirfel launched the V 41 with B&R PLC control unit and MC 100 counter. In the year 1993, the V 51, which is equipped with a Windows-based Beckhoff IPC-PLC control unit, was released. Analogous to manual vertical and angular cutting machines, special machine editions (V 51/5) with a single bevel, smooth or toothed bandknife for technical applications and low cutting heights were available since the release of the V 21. Likewise, equipment variants with bandsaws were now available that can be identified by the model designations V 23, V 33, V 43 and V 53.

For a long time, the contour cutting of thin and flexible material could only be realized manually and with the help of templates, which was a time-consuming process. This changed in 1996: From that time onwards, the brilliant combination of a vertical cutting machine and a contour cutting machine, namely the vertical CNC contour cutting centre F 52 (today referred to as F 62), has been facilitating the CNC controlled automatic contour cutting of individual layers or stacks of these materials. The stationary cutting unit with a patented bandknife running over five knife pulleys, two of which were movable, was equipped with conveyor units in front of and behind the bandknife. The single bevel bandknife could be rotated with the help of a knife twisting device by +/- 270°. The cutting speed was up to 40 m/min. However, the evolution of the CNC contour cutting centres was nowhere near the end at that time: In 2006, Fecken-Kirfel successfully introduced the F 62 on the market, which was an advancement of this contour cutting centre. At first, this new machine elicited incredulous amazement from customers and interested parties: A twist of the bandknife by +/- 360° seemed impossible to them, and a maximum cutting speed of 100 m/min surpassed all their expectations. It is therefore hardly surprising that the contour cutting centres have written and continue to write their own success story: So far, more than 320 Fecken-Kirfel contour cutting centres of the types F 52 and F 62 have been delivered to our worldwide customers. Of course, this also encompasses Fecken-Kirfel software solutions – as for instance 2-D/3-D-Nesting, Autorouting and Pick-by-View - that optimize production processes, facilitate a material and cost reduction and increase efficiency with regard to the control of complex cutting lines.

It is an integral part of our corporate philosophy to consistently further develop our machines and lines in order to always offer the greatest benefit to our customers. This also applies for the evolution of the automatic vertical cutting machine V 51 into the fully automatic cutting and trimming machine T 8 that we already introduced in our article on “The evolution of Fecken-Kirfel machines: Step by step to a fully automated cutting line”. This all-rounder for the cutting, partitioning and trimming of foam blocks is a good example of a successful harmonization of different machine types. The machine comprises a movable cutting unit, a material conveyor unit in front of and behind the bandknife as well as a double bevel bandknife and a knife guide that is rotatable by 90°. It facilitates the cutting of material during the forward and backward motions of the cutting unit and the conveyors. The key advantage: With the T 8, it became possible to achieve longitudinal cuts of long blocks, to trim those blocks or, if needed, subdivide them in just one single working process. Although the T 8 – and also the T 8 S with unilaterally sharpened, smooth or toothed bandknife or bandsaw – can be deployed as stand-alone machines, the benefits of this machine type become most evident if it is integrated into a complex cutting line. And it is no exaggeration to say that the T 8 has become practically indispensable to ensure efficient production processes. Thus, it is hardly surprising that Fecken-Kirfel has already produced and sold this machine type more than 120 times until the present day.

Every three years, when the ‘K’ trade fair for the plastics industry approaches, we at Fecken-Kirfel are only too happy to share the following anecdote: In 1987, one year after we had launched the automatic vertical cutting machine V 41 with B&R PLC control unit and MC 100 metering device, one of our customers confronted us with an idea at the “K” trade fair that seemed “crazy” to us at that time. He asked us if it was possible to automatically generate cutting lines for horizontal contour cutting machines. Our first reaction was to dismiss this idea as something “completely impossible”. In this point, however, it turned out that we were completely mistaken – even though it was to take 20 more years before this visionary idea could finally be realized. Meanwhile, Fecken-Kirfel machines are equipped with features such as autorouting, automatic nesting and an automatic creation of cutting programs.

What did we learn from this? Whenever we are faced with new challenges, we see this as an invitation to find effective new solutions. Even if we cannot image today what will happen in the future: Fecken-Kirfel will stay ahead and defend its key role in the cutting machine business as an industry leader. 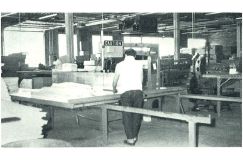 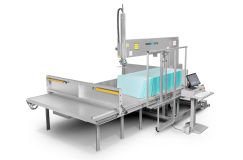 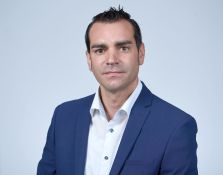